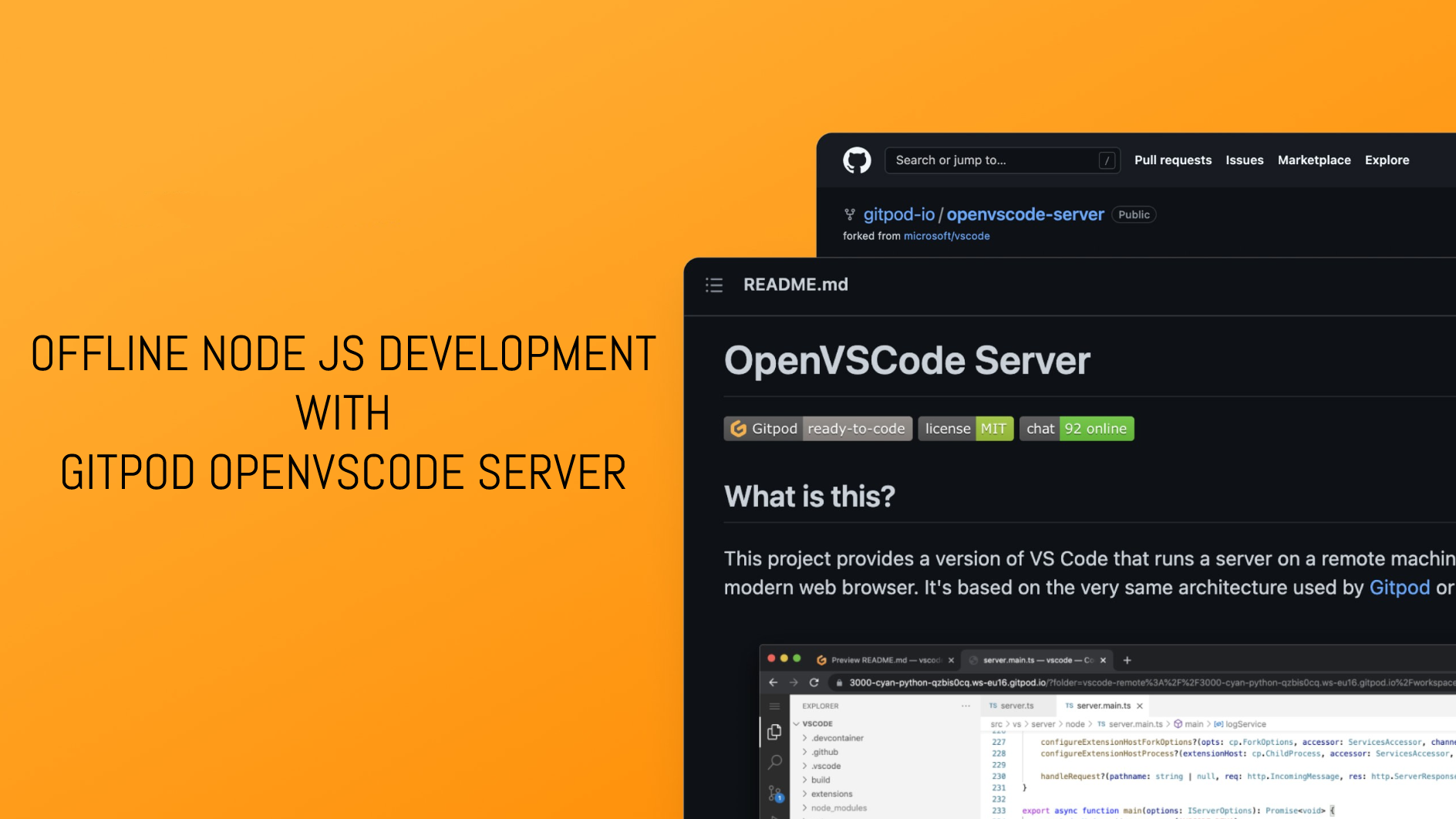 open-vscode server now does a lot of online checks that prevent a good amount of functionalities from working offline. there is another project called code-server that does not have that issue.

I will be creating a blog post for it sometime soon on how to configure it for an offline environment. Though generally, it’s similar to this one, but with different directories locations.

Working in offline environments is really difficult nowadays with almost everything connected to the internet. This is especially true with development, whether it is with Node or Python as they most probably require an online package repository to download their packages from.

On top of that, you might be restricted from installing executables, and you will be stuck with windows default applications like notepad to do your coding. This is not an ideal environment for a developer.

The solution to work around these limitations is the newly introduced openvscode-server by gitpod.

Now, this solution will highly depend on docker. So on both of our offline and online environments, we will need:

We need to be solving 3 main problems when developing in an offline environment with vscode.

In order to solve those problems, we will need to follow this flow:

Since we won’t have any access to vscode’s marketplace in our offline environment, then we will need to install them in an online environment first and copy those extensions to a customized docker image.

For NodeJs development, we will need to install node, npm, and yarn.

We will have to install the dependencies of our node project during the process of creating our docker image.

In our online environment, we will run an openvscode-server docker container first

Make sure to specify the version you are deploying, as this is important for the vscode extensions compatibility. As of writing this blog post, 1.63.2 is the latest version. To check the more recent versions in the future, you can visit the tags section of the image on dockerhub.

once you have it deployed, you need to check the container’s logs to get the security token. Running the earlier command will print out that log into your shell.

Once we have it copied, we will access openvscode server with the port we exposed, and passing the token as a URL parameter:

And we can now view our web-based self-hosted vs code!

The next part is to install the extensions we usually use with vscode. This step is up to you as each person has their own preferences.

You may have noticed that the extensions marketplace looked odd, with the ratings being less than how you’d usually remember them to be. This is because gitpod used open vsx registry as their marketplace. code-server, a project similar to gitpod’s openvscode-server details the reasoning behind it. Long story short, it’s due to Microsoft’s Term of Service.

Copy The installed vscode extensions to the host

the plugins that we installed will be in this directory in our container:

what we will need to do is to copy those extensions from our docker container to our host.

first, we need to find the container id

once we do, we will copy the extensions to our host.

Now in a single directory, we will have the extensions that we just copied from the container, the Node Project we want to move to the offline environment, and we will create a dockerfile.

For the project, I created a simple Typescript Express app that gives me a simple HTML “hello” page:

in the dockerfile, we will have the following configuration:

let us walk through what we are doing with each part.

means we are using gitpod/openvscode-server:1.62.3 as our base for this image, and we will build on top of it.

here, we are copying the extensions directory from our host to the new image’s extensions path. It’s the same path that we got the installated extensions from our running instance.

and here, we are copying the node project directory to the image.

Our base image gitpod/openvscode-server:1.62.3 already has /home/workspace directory, and with our COPY command, we are creating the directories repo and my-project, then copying our host my-project directory to our image.

openvscode-server image is based on ubuntu:18.04 image. With that in mind, it means we can install our packages through the apt command.

Before we do so, we will need to update our repository list first, since the ubuntu image is as bare bones as possible, and it wouldn’t have a list of the most recent available versions of the packages.

we’ll be installing curl, as we need that to install NodeJs.

This command will let us install NodeJs v16’s repository into our apt sources. We are doing this because the apt repository is not updated to have the most recent versions of NodeJs.

Note that we are installing v16 in this tutorial, which is LTS as of writing this Post. This may change in the future, and you can find which repository to add from here.

these commands should be self-explanatory for a NodeJs developer. We are installing NodeJs, NPM and Yarn. when installing NodeJs from the repository that we added, it will install NPM with it.

we can then change our working directory to where we copied our project, and install the dependencies. You’d be using npm install if you were using NPM here. WORKDIR is somewhat similar to cd.

Finally, we are modifying the original ENTRYPOINT to change the port openvscode-server will run on in the container.

This is because 3000 is a common port for React for example, and rather than having to change React’s listening port, we will change openvscode-server’s port instead. We are doing it this way because we want the back and forth transition between our online and offline environments to be “seamless”. The goal here is to give a similar experience to when developing in an online environment, without the need to re-configure our project.

with our dockerfile ready, we will type the following command at the same location of the dockerfile:

and this will build our image with the tag we just gave it.

Moving the Docker Image to an Offline Environment

Save the Docker Image

to save the docker image, we can use following command:

after we get the image exported to the tar file, we will then copy it to our offline environment

in our offline environment, we will load our docker image with this command:

Running the Container in the Offline Environment

From there, we can finally get our container started with the image that we created, and it should work right away.

we will create a docker-compose.yml file:

then inspect the logs:

and that’s it! our offline development environment should be working properly from here!

we can test out our node express app, and it will be able to run it properly!

we can then visit the page from the port we routed it to, and we will see our “hello” page there as well.

This solution is to get you up and ready for offline development quickly. Though, am sure you can tell that there are a few limitations.

These limitations luckily have solutions for them, and we will be discussing them later in the future.

Offline environments are a huge obstacle for developers, and overcoming them can be a daunting task. The power of docker and gitpod’s openvscode have greatly simplified preparing a development environment very quickly.